George Kurtz won Round 5 of the 2022 GT America powered by AWS Series, ending a dominant day that started with a last-second pole position in qualifying this morning and ended with a light-to-flag Grand Slam victory .

Ten minutes past noon on a sunny Saturday afternoon, a grid of 26 GT3, GT2 and GT4 cars took the green flag. Kurtz led the seven-man SRO3 class field to the green flag and led the opening lap ahead of the #191 Zelus Motorsports Lamborghini Huracan GT3 of Utah’s Jeff Burton.

Kurtz and Burton set the fastest laps before a safety car was deployed on lap five when Matthew Ibrahim’s #60 Dexter Racing Ginetta G56 GT4 stopped at Horseshoe Corner (Turn One).

When racing resumed, Kurtz got the drop on the field and began to gradually back away, resetting the race’s fastest lap several times after the restart.

He completed 21 laps en route to a perfect win, his second SRO3 class win of the season and his first since the inaugural race in St. Petersburg, Florida. And setting the fastest lap of the race at 1’46.353 Kurtz is guaranteed pole position for tomorrow’s Race 2 and could be poised to win the weekend.

Lumber magnate Burton finished second and Zelus Motorsports put both cars on the podium after Jason Harward stormed through the field after a pitlane start and Andy Pilgrim’s #56 SKI Autosport Ferrari 458 Italia GT3 was third from last snapped lap while working their way through slower GT4 traffic!

It was a great recovery from an accident at Oak Tree Corner (Turn 11/12) in GT World Challenge America qualifying – and a subsequent tire change at parc ferme – that forced Harward into a pit lane start. He even went off track at the same spot during the race but didn’t lose position as he regrouped and charged forward. 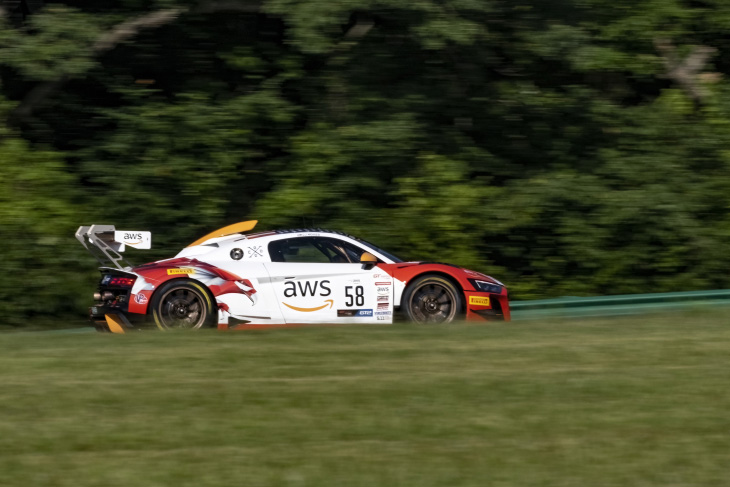 CJ Moses also came out of the pit lane and was the only GT2 starter to finish seventh overall. He beat the SRO3 class #70 MISHUMOTORS Callaway Corvette C7 GT3-R of Mirko Shultis after the German journeyman went off course on the final four laps.

Adam Adelson celebrated his first GT4 class win of the season in the #120 Porsche 718 Cayman GT4 Clubsport RS. This follows a GT4 America Pro-Am win at the final race meeting at NOLA Motorsports Park in May.

Ross Chouest in the #50 Chouest Povoledo Racing Vantage wanted to play for second place but he overdid the first part of the Horse Shoe and went off course. This allowed Adelson to break away from Uretsky, who was now heading towards Jason Bell’s #2 GMG Racing Vantage.

Adelson completed 20 laps to take the win, with Uretsky second and Bell third. 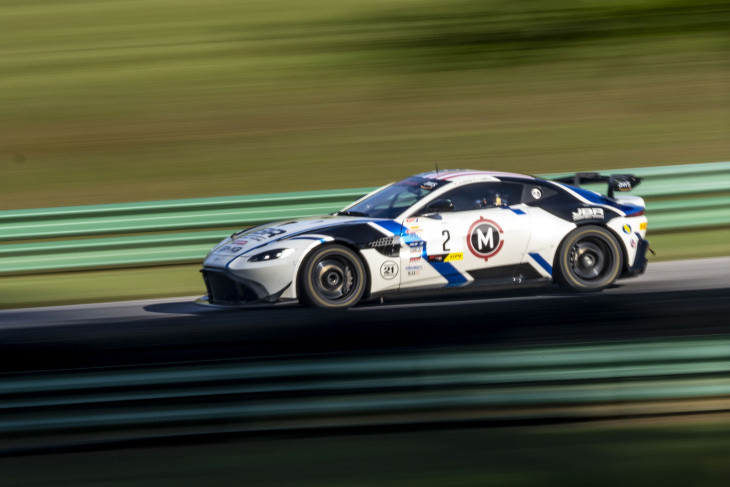 Alain Stad’s #19 NOLASPORT Cayman was a late scratch on GT America this weekend (he and Seth Thomas will only race GT4 America), while Nick Shanny’s #21 Carrus Callas Raceteam GR Supra did not start. Chris Alliegro’s #124 ARG/Rotek Racing Ford Mustang GT4 retired after 11 laps following an incident with Sean Whalen’s #888 Zelus Motorsports Vantage GT4 and was the third retirement after Ibrahim and Shanny.

It’s been a very busy day for sportscar racing news surrounding the future of the Le Mans 24 Hours. Next week, the SRO Motorsports Group America series will make its next stop at VIRginia International Raceway, led by the GT […]