This is an adaptation of an article that appeared in the June/July 2022 issue of RACER Magazine – our 30th Anniversary issue. Click here to learn more about our subscription offerings.

Corvette Racing is contesting the 22nd consecutive Le Mans 24 Hours and is targeting the first win for the C8.R and first since 2015. Featuring the two cars owned by Tommy Milner, Nick Tandy and Alexander Sims (#64); and Antonio Garcia, Jordan Taylor and Nicky Catsburg (No. 63) with the double wins, the Corvette has a good chance of winning the 24 Hours of Le Mans for all four generations of cars that have brought it to Le Mans.

In the June/July 30th Anniversary issue, RACER explored the story of Corvette Racing’s success in the American Le Mans Series and the IMSA Sportscar Championships in North America and at Le Mans across generations of cars and across multiple classes. Much of this success comes from continuous improvement with each generation. General Motors and Pratt & Miller work together to take the lessons learned from one version of the race car to apply to the next generation of road cars to produce a better race car. Win and repeat. While RACER addressed the development in the magazine, we thought it worth diving deeper into how one generation triggered improvements in the next.

“The people working behind the program are the ones who really make this possible,” says Garcia. “So when you have GM and Pratt & Miller together, that has proven to be a really good combination. Pratt & Miller has never stopped improving, developing and deploying the new tools available year after year over the years. So if you look back from the very first Corvette to the very last, I think all the resources that went into each of them over the years have changed a lot.”

Pratt & Miller had a pretty good working platform in the C5, but it was far from ideal. Pop-up headlights and the Cat Whisker air intakes weren’t what the car needed for success, especially at Le Mans.

“Corvette C5 was a project developed by Dave Hill, which was the first Corvette with proper technology, advanced materials and processing,” says Doug Fehan, Corvette Racing’s longtime program manager, who now serves as an ambassador. “It was going to be a great car because it was going to be completely different, a clean sheet of paper, from the ground up, all new. And herb [GM Racing head Herb Fishel] and I had developed the desire and willingness to compete with the Corvette at Le Mans on a global scale.”

Fehan, who first pitched the idea of ​​a racing program in 1996 that would be much more than a win-Sunday-sell-Monday proposition, maintained an office at Pratt & Miller and writes the technical expertise of Gary Pratt and Jim Miller’s business acumen with much of the program’s success over the years. GM had previously worked with the company on the Intrepid GTP program, and Fehan describes the company in the early days as eight guys and a pickup truck. The company, now known as Pratt Miller, was recently sold to Oshkosh Defense for $115 million. While defense projects will be a big part of the company’s work, Corvette racing is still an important part of the business and the company will be developing the GT3 version of the C8, which will debut in 2024.

Corvette showed she’s a true GT big dog in 2001 by taking an overall win at the Rolex 24 at Daytona and then a first class win at Le Mans driving a GTS 1-2 for the C5-R. Motorsport images

With Intrepid’s experience in hand, Fehan would be, although Pratt & Miller would be the ideal partner to develop Corvette into a world-beating race car. But as good as the C5 was, and it was a big leap from the C4, Pratt & Miller still had a lot of work to do with it.

“We inherited a C5… the racing team had no say in the design of the C5, it was ready when we got it. And it was a great vehicle, but it had some real challenges making it a race car. If you remember the C5, you know it had those little cat-whisker air intakes in the front grille and sucked air in from under the car. It really made it very difficult to get enough combustion air into the engine, engine cooling air and brake cooling air with this body design,” explains Fehan.

Despite this, the team achieved three victories at Le Mans with the car. Corvette engineer Dave Hill then listened to what the racing team had to say about that car, and Fehan notes that Hill thought he could use what he learned in racing to build a better street car, which in turn would be a better race car .

“When C6 was on the pad, which was about the time we started racing, Corvette chief engineer Dave Hill said, ‘Well, what do you need?’ I said I need a large, single air intake. I need the windshield tilted back as far as you can tilt it back. I need headlights that don’t flip up – I need flush mount headlights, which was heresy. He gave that to us.”

The flush headlights were a bigger deal than one might imagine. From the C2 to the C5, Corvette always had some sort of pop-out or flip-up headlight. But with the coming HID lighting, which required transformers and a bunch of other stuff to work, it was time to stop.

C6 was an instant hit, giving Corvette second and third straight Le Mans 24 Hours wins, with four overall wins and four other straight American Le Mans Series championships. The partnership in the further development of the Corvette between the racing team and the production team continued. 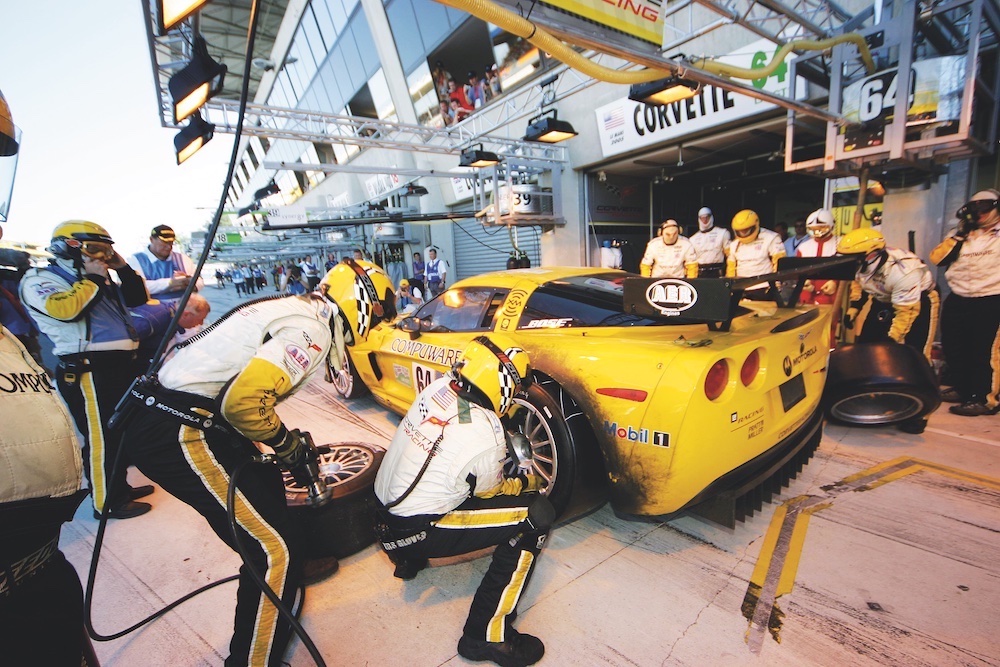 The C6.R scored its first class win at Le Mans in 2005 – the first of four for the second-generation Vette racer. Richard Dole/Motorsport Images

“C7 had what we call the waterfall hood. Radiators in cars were always straight up and down, which somehow made it a problem to get the air through. They wanted the radiator to slope forward, and in the C7 we were able to slope that radiator forward and create that smooth flow of air up through that radiator and then through the top of the hood. That was a direct derivation from racing,” says Fehan.

“And then all the things you don’t see – the components, the materials, the lightweight body. All of these things that we developed in racing were looked at by the production design team. They learned in racing how to make the bottom of the car perfectly flat and smooth so that the air underneath can escape more quickly. Pratt & Miller performed much of the computational fluid dynamics on the race car and eventually helped GM with some CFD work on the Corvette body. And that gave us the C7 (main image) It was a pretty awesome race car and a massive road car.”

Meanwhile, Tadge observed Juechter. Not yet the man in charge, he had witnessed the trials and tribulations of Corvette development. But he would be tasked with overseeing what might be the biggest evolution in the car’s history, the transition from the front mid-engine to the LT2 engine behind the driver. And there’s a valid argument that without Corvette Racing’s years of success when it was given the green light, this C8 doesn’t exist in its current form.

“Tadge knew this was going to be quite a mountain because his goal was that for the first time we would actually work hand in hand, the race car design guys and the production team guys working together to design and build this C8 . And we would do it at a level never before seen, by anyone, any manufacturer, really. Tadge was dedicated, and he was just a pit bull doing things we needed to have. And the results are quite stunning,” Fehan notes, his excitement at the results clearly audible in his voice.

“Tadge was a guy who damned the torpedoes, full speed ahead. He wanted to do it, and he worked to make it happen. That’s why the car is just as good as it is. For me, since that 1996 presentation, this is the car that embodies everything I have ever dreamed or imagined a racing program could do. It really is the last distillate of 25 years of enormous effort by everyone involved,” summarizes Fehan.

For the 2022 season, Corvette is splitting their efforts, fielding a modified version of the C8.R in GTD Pro in the IMSA WeatherTech SportsCar Championship and the C8.R GTE car throughout the World Endurance Championship. Both programs came together at Daytona and are back together at the 24 Hours of Le Mans. Sunday will show if the final version of the GTE car is victorious at the Circuit de la Sarthe and the C8 can count a Le Mans win on its résumé before the GT3 era begins.

Caton’s Healey is based on a mid-1950’s Austin-Healey 100 BN1 series katan Say hello to the latest must-have restomod. You might know the recipe by now – take a legendary classic car, strip away almost everything and replace it with […]

The Japanese brand is quickly developing a reputation for making high-performance cars, and this one has a BMW secret weapon. Toyota’s Gazoo Racing (GR) has sent the brand’s street credo into hyperspace with its chic GR Yaris, Gen Z favorite […]

The Japanese marque is quickly developing a reputation for producing cars with excellent performance and this one has a BMW secret weapon. Toyota’s Gazoo Racing (GR) has sent the brand’s street credo into hyperspace with its chic GR Yaris, Gen […]