Porsche is bringing a new special edition of the 911 GTS to the country under the “America Edition” trim, aiming to debut a new car exclusively in the United States. The 911 GTS America Edition is a celebration of Porsche’s debut in the United States, focusing on the 70 years that it has been available in the country and patronized by its citizens.

According to a press release from Porsche, a new 911 Carrera GTS Cabriolet comes with the special name “America Edition” that examines a modern version of a bygone vehicle. The release of the 356 America Roadster in 1953 and 30 years since the 964 America Roadster that the German car company brought to the country.

The 911 Carrera GTS Cabriolet is an internal combustion engine car that uses a twin-turbocharged three-liter flat-six engine with its famous boxer engine technology, producing 570 Nm of torque. It’s a powerful engine and vehicle, and it’s given a distinctive America Edition color scheme of Azureblue356, which debuted on the 356 America Roadster.

It also brings a top-down roof that mimics the old roadster.

Also read: Porsche invests in electric car startup Rimac – How much did the investment cost?

70 years of Porsche in America: A look back

According to CNET, Porsche’s US journey began in the 1950s when the company first started selling cars in the country and was inspired to make a more affordable vehicle for the region. It debuted the 356 America Roadster with just 16 units sold. 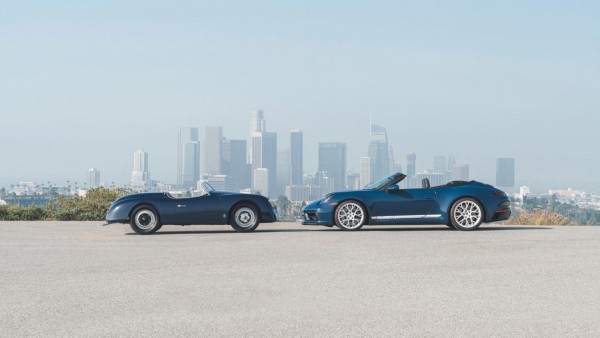 Since then, Porsche has become a big name in the country and the German company has supplied the US with its vehicles.

The new Porsche 911 Carrera GTS Cabriolet America Edition arrives in late 2022 as the 2023 model of the vehicle.

Porsche and its vehicles

The German car manufacturer Porsche is very famous in the world for its luxury sports car that brings significant performance as well as a status symbol for its driver. The name is a global entity that discusses quality engineering and performance unmatched by others in the same industry.

Many wanted to copy Porsche for its roadsters and sports cars, but not many can match its capabilities and accomplishments, especially with the 911 name in the company. Now there’s a rumored vehicle in Porsche’s lineup, and it’s with the 911’s move to a hybrid setup that will free up some of its engine for clean energy.

Porsche also aims to convert 80 percent of its vehicle production to clean energy by 2030, consisting of all-electric cars, hybrid vehicles and a rumored use of e-fuels.

Still, 20 percent of its cars will adopt the standard internal combustion engine, staying true to its heritage and original brand. The 911 Carrera GTS Cabriolet America Edition pays homage to the company’s legacy 70 years ago, when Porsche’s car gained exceptional traction in the country and established itself in the global vehicle industry.

Related article: Porsche is pushing for a lithium-silicon EV battery with Group14 and funding its development

This article is owned by TechTimes

ⓒ 2021 TECHTIMES.com All rights reserved. Do not reproduce without permission.

A Porsche 911 in the Porsche Experience Center © 2022 Porsche Cars North America, Inc. I’ve been driving my family to Anaheim for the past 25 years, but no more. Both of my kids have outgrown the mouse, so the […]

TORONTO, June 28, 2022 (GLOBE NEWSWIRE) — The virtual one-make cup of the Porsche Esports Sprint Challenge Canada has held its final race of the season at the Canadian Tire Motorsport Park. The third edition of the championship, hosted on […]