It’s been a very busy day for sportscar racing news surrounding the future of the Le Mans 24 Hours. Next week, the SRO Motorsports Group America series will make its next stop at VIRginia International Raceway, led by the GT World Challenge America series, which will have its fifth and sixth rounds of the 2022 season.

The flagship series is expected to return to its standard 20-car grid, with the Pro Cup #33 Winward Racing Mercedes-AMG GT3 (Russell Ward/Philip Ellis) and the Pro-Am #38 ST Racing BMW M4 GT3 (Samantha Tan /Nick Wittmer) back in action after withdrawing from the previous event at NOLA Motorsports Park.

There are no other changes to the entry list like in New Orleans. The #1 K-PAX Lamborghini Huracán GT3 Evo, driven by Andrea Caldarelli, will attempt to maintain its perfect record in Pro class competition as the Pro-Am Cup standings of the #04 Crowdstrike Racing by Riley Motorsports AMG GT3 ( George Kurtz/ Colin Braun), who have a four-point lead after four races.

41 cars are on the provisional entry list for rounds five and six of the GT4 America series, including two newcomers to the 2022 grid.

After a two-year absence, New York-based company KRUGSPEED will field the #72 Toyota GR Supra GT4 for drivers Anthony Geraci and Jaden Lander in an Am Cup entry. Joining them in the same class is team ACP – Tangerine Associates brand new competitor, who recently won the GT4 class at the 12 Hours of the 24H Spa-Francorchamps series. Their #152 BMW M4 GT4 will be driven by Alex Amine and Ryan Hall.

“This is something we’ve been working toward with Team ACP for the last two seasons and we’re excited to finally see fruition,” Hall said. “Alex has proven himself again and again and is also looking forward to coming to the SRO paddock on his favorite track.”

The #89 RENNtech AMG GT4 has an all-new lineup consisting of Paul Kiebler (who will drive for the same team in GT America) and Jon Branam, while Mike Skeen takes the place of Billy Johnson in the returning #124 ARG/Rotek Racing Ford Mustang GT4 Jnr next to Edgar Lau.

Also, effective this upcoming round, the #49 Team Saleen S1 of Steve Aleen and Eric Curran has been moved from the Invitational to the Pro-Am category following the homologation of the S1.

Alain Stad’s co-driver in the #19 NOLASPORT Porsche 718 Cayman GT4 RS Clubsport has yet to be announced. Seth Thomas replaced Thomas Merrill in the eleventh hour during the NOLA weekend and the duo won Race 2 in the Am Cup. Her teammate Jason Hart will be in action at Le Mans this weekend before returning to GT4 America duties next weekend. 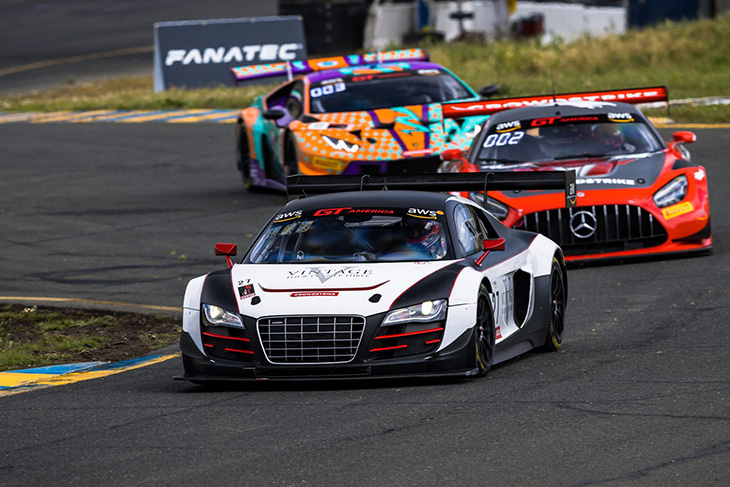 For the first time since April’s Sonoma Raceway meeting, the GT America sprint series returns with a 26-car lineup for its third race meeting of the year.

Joining the SRO3 class field is the expected return of legendary World Challenge Champion Andy Pilgrim in the #56 SKI Autosports Ferrari 458 Italia GT3. Pilgrim will be part of a seven-car class made up of current and former GT3 cars. After four races, George Kurtz and the #27 Daskalos Motorsports Audi R8 LMS Ultra driven by Jason Daskalos are tied at the top of the standings.

Between them and the 18 cars in GT4 is the returning #58 GMG Racing Audi R8 LMS GT2 of CJ Moses, which missed the Sonoma Round.

Jason Bell, driver of the #2 GMG Racing Aston Martin Vantage AMR GT4, currently leads the GT4 standings by six points over Ross Chouest and a further two points ahead of Mirko Radisic. Bell, Radisic and Hunter McKenna will be seeking their second class wins of the season this weekend – while the other 15 contenders are seeking their first.

George Kurtz wins Round 5 of GT America at VIR

George Kurtz won Round 5 of the 2022 GT America powered by AWS Series, ending a dominant day that started with a last-second pole position in qualifying this morning and ended with a light-to-flag Grand Slam victory . Ten minutes […]